5:30 we left Hayfield on the Saturday morning, with a planned start of cycling from Bowness on Solway at 8am. Things did not go according to plan.

Somewhere between junctions 39 and 40 on the M6, and we have a flat tyre. I go to change the tyre, to a) shear the bolt holding the spare under the rear of the car, and b) to find the spare tyre flat. So I ring the AA and am told my membership has just expired. A few more phonecalls and a recovery vehicle is on its way. An hour or so later the spare is reinflated, and we are on our way. Yay!

Shortlived was our relief, because as we turned off for Carlisle, I could feel the spare tyre was now also flat. We were having some luck though, as we drew to a halt only a few yards from an ATS tyre place.

By the time they had fitted a new tyre any hopes of an early start had long gone. We arrived in Bowness on Solway the start of Hadrian's Cycleway just before 11am.

A quick change into our cycling clothes, a photo, and at 11:04 we were off. 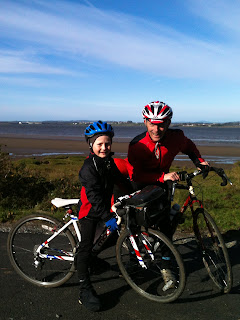 The temperature was just the right side of freezing, and the wind was at our backs. Our day was getting better.

The route was all but flat until Warwick Bridge which meant good progress. At Brampton we had to make a decision. Should we camp there, or push on to Haltwhistle. The only factor being would we get there before dark. Mental arithmetic decided that if we didn't stop, then we should make Haltwhistle at dusk.

The only lights we had were flashing LEDs which would ensure we wouldn't get run over, but wouldn't be much use for seeing where we were going in the dark.

As we rolled into Haltwhistle darkness had all but fallen. It must be nearly 20 years since I've camped at Haltwhistle, and finding the campsite I'd stayed at before didn't prove too easy. We did find a sign for a different campsite, and this we followed up a steep hill in the darkness, and now falling rain. A mile or so out of Haltwhistle we arrive at Herding Hill Farm Campsite.

The owner kindly offered a deal on a night in a heated pod which meant putting up the tent was not a consideration. 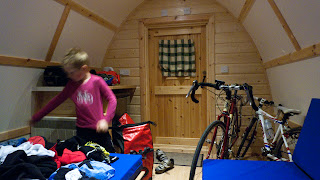 The other ace thing about this campsite was that they did great pizzas, and draft beer too. We'll stay there again.

Proper Northumbrian rain was forecast, and the forecast was true. I didn't know for sure where we'd encouter hot food enroute, so we waited for the campsite to open for a proper hot breakfast.

The next section of the route is definitely the most beautiful, and the rain did little to take away from it.

After an hour and a half we reached the high point of the route. 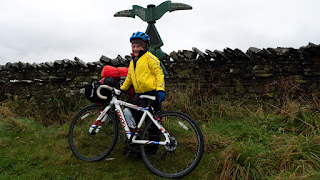 After which the rain lessened and it was mostly downhill for a late lunch in Corbridge. 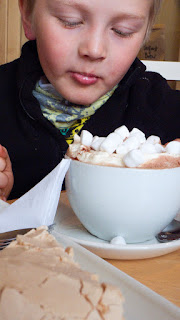 Then a trundle to our campsite at Ovingham. 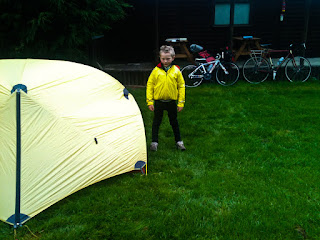 A word of warning, don't expect an evening meal in a pub in either Ovingham or Wylam on a Sunday night in late October. We ended up having to ride into Prudhoe to a find a chippy.

Only 23 miles now to Tynemouth we wrapped up well, it was a chilly morning. We left our tent at the campsite as we would comeback later that evening on our return journey. 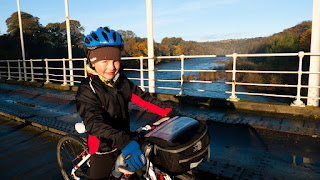 Not much to report about this section of the route, except to say that the signposting is excellent and it follows the course of the Tyne to Newcastle and beyond. 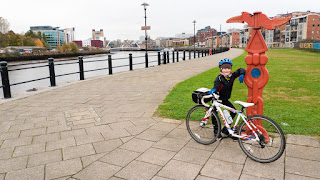 We did like the Cycle Hub Cafe in Newcastle so much that we stopped for a late breakfast there on the way, and for lunch on the way back.

Near enough 48 hours after leaving the Solway we arrived at Tynemouth. 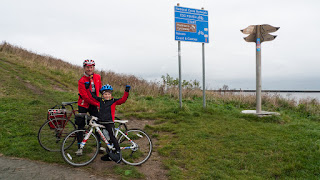 A leisurely ride back to the campsite therafter, stopping for a pint of the aptly named "Coast to Coast" on the way.


The forecast for what might have been day 5 was looking atrocious, heavy rain and winds. We made the decision that we would try and get back to Bowness on Solway in one push. Tom had been completely unfazed by the mileage we'd done each day so far, so I reckoned it was possible.

As with day 1 the impetus was to be could we make it before nightfall. Tom had been instructed to press the snooze button on my alarm at 6:15. He instead turned the alarm off. 7:30, later than hoped we were on the road.

Flapjack fuelled us to Hexham, where we had hot food and drinks at a buttie van. Tom "riding like he stole it" asked for cake in Haltwhistle, so we bought a big lemon and lime cake, and ate it all.

A picture by Hadrian's Wall a must. 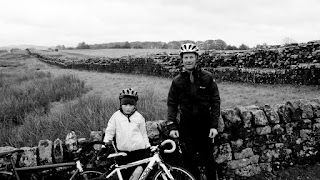 Coke, chocolate and mince pies in Brampton and we are still looking good for finishing in daylight.

A couple of hours later we drop down to the Solway just as dusk is falling. 30 hours after leaving Tynemouth. Tom was very pleased he had beaten his own record by 18 hours.

You might suppose Tom at the age of 7 after 75 miles in the saddle that day would be tired. Yet at 10:30 after his supper and a couple of drinks in the Hope and Anchor at Port Carlisle, he still did not want to go to bed.

"Where are we going next daddy?" 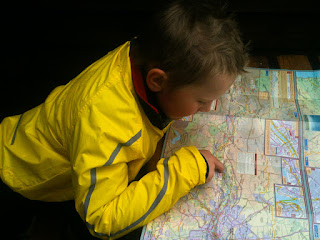 "Bowness to Tynemouth and back again.
Father, Richard and son Tom age 7, recently completed the 200 mile round trip in late October.
WELL DONE - Tom is the youngest to achieve this".