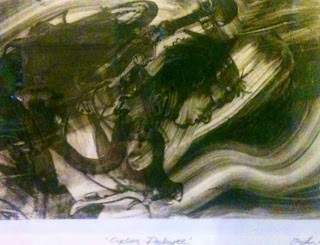 I had ridden the Three Peaks Cyclo-Cross race four times before this year.

From the second attempt onwards, as I've signed up in July, I always think that this year all will go according to plan. Plenty of training before the race, peaking at just the right time, and no mechanicals or big crashes on the day. To date all these elements haven't been present together on that last Sunday in September. The last time most everything went wrong other than some sort of fitness.

2013 has been a good year on the bike for me. Fitness with six weeks to go was probably the best it has ever been. Then on a night ride I came off my bike and broke my arm. I'm sure it's no surprise but for the first few weeks, any sort of training just didn't happen whilst my arm started mending itself.

After a couple of weeks, tentatively I started doing the miles again. The kids were back at school now, and as most parents know, a new year at school comes with a number of illnesses that your children bring home. So another couple of weeks laid low first coughing my guts up, then secondly expelling the contents of my guts.

Two weeks to the race start, and I'm more or less healthy, but efforts show that I've definitely lost a good wodge of speed. Hard gained, and now lost without time to get it back.

Still to the start line somewhere in the first couple of hundred riders I stand prepared to give the race my best efforts. The heart rate is quickly up to 170 bpm which it stays near to for the rest of the race.

The "neutralised" start seemed much slower than in former years, and I easily kept up with the folks around. At Gill Garth there wasn't the usual traffic jam, and I rode all the way to the foot of the wall of tussocks.

Simon Fell wasn't as long as I'd remembered it, and Rawnsley's Leap quickly came.

Impatient I took a chance.  A drop down into a sheep hole. If it'd gone to plan the two foot drop down wouldn't have been worthy of mention. However the front wheel didn't roll out, it just stayed there. I knew what was coming next. The riders behind going "Oooh" confirmed that.

Over the bars and a big crunch from my neck as I landed on the ground. Pins and needles pass from my neck down my arms to my fingers. Dizzy and I don't mind saying a bit shaken I lie there not sure of what to do next. A few seconds taking stock and I try and move. I feel no sharp pains,  and I can move my neck. My arms are somewhat numb, but hey they still move.  This the second time in six weeks I've landed on my head. What I did next was probably not the best course of action. I got up and made sure the bike was still fit for duty.

Back on the bike I look at my Garmin. My heart rate has dropped to 150 bpm. If I was racing it should be faster. Better crack on then.

The rest of the race passed without incident. There was wind and technical riding, but I focussed on the racing. I continued to pick up a few places and especially enjoyed Pen y Ghent both on the way up,  riding loads more ascending than in previous years, and the down where in spite of traffic I made up a good bit of time.

A PB but again my planets weren't all in alignment.

Thanks to all those who shouted encouragement on the course.

Sorry I didn't catch up with everyone afterwards.

Thanks to the race organisers and the marshalls.

Finally a big thanks to my Family and James for providing drinks, bananas and encouragement.