I was late for my arbitrary start time of 10pm. I drove carefully along Rushup Edge on wet roads, and through the low swirling cloud towards Mam Tor. I was nervous.

I parked a 1/3 of the way down the climb, and readied my supplies in the back of the car. 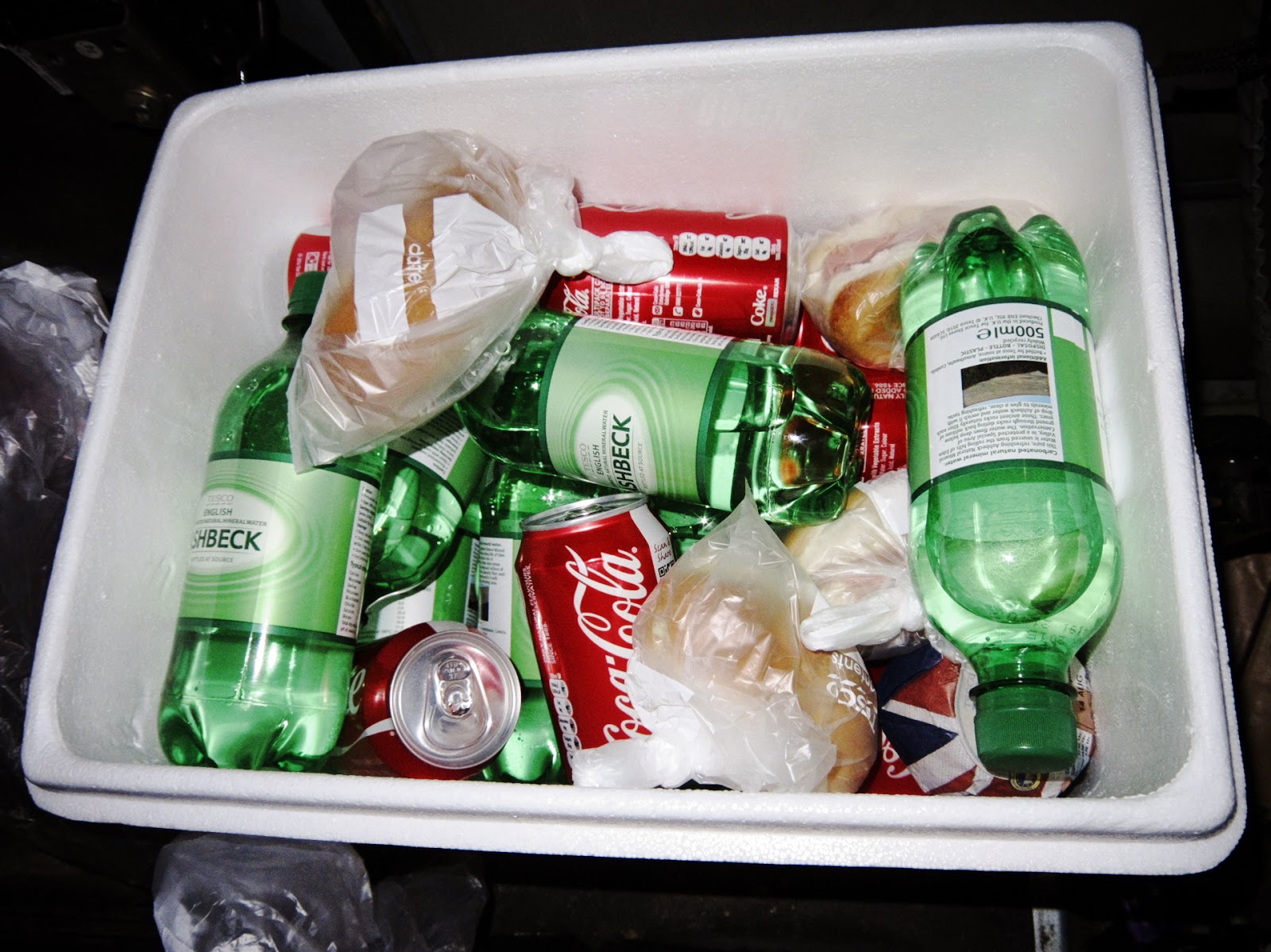 Time for a basecamp photo and then down towards Edale for the start. 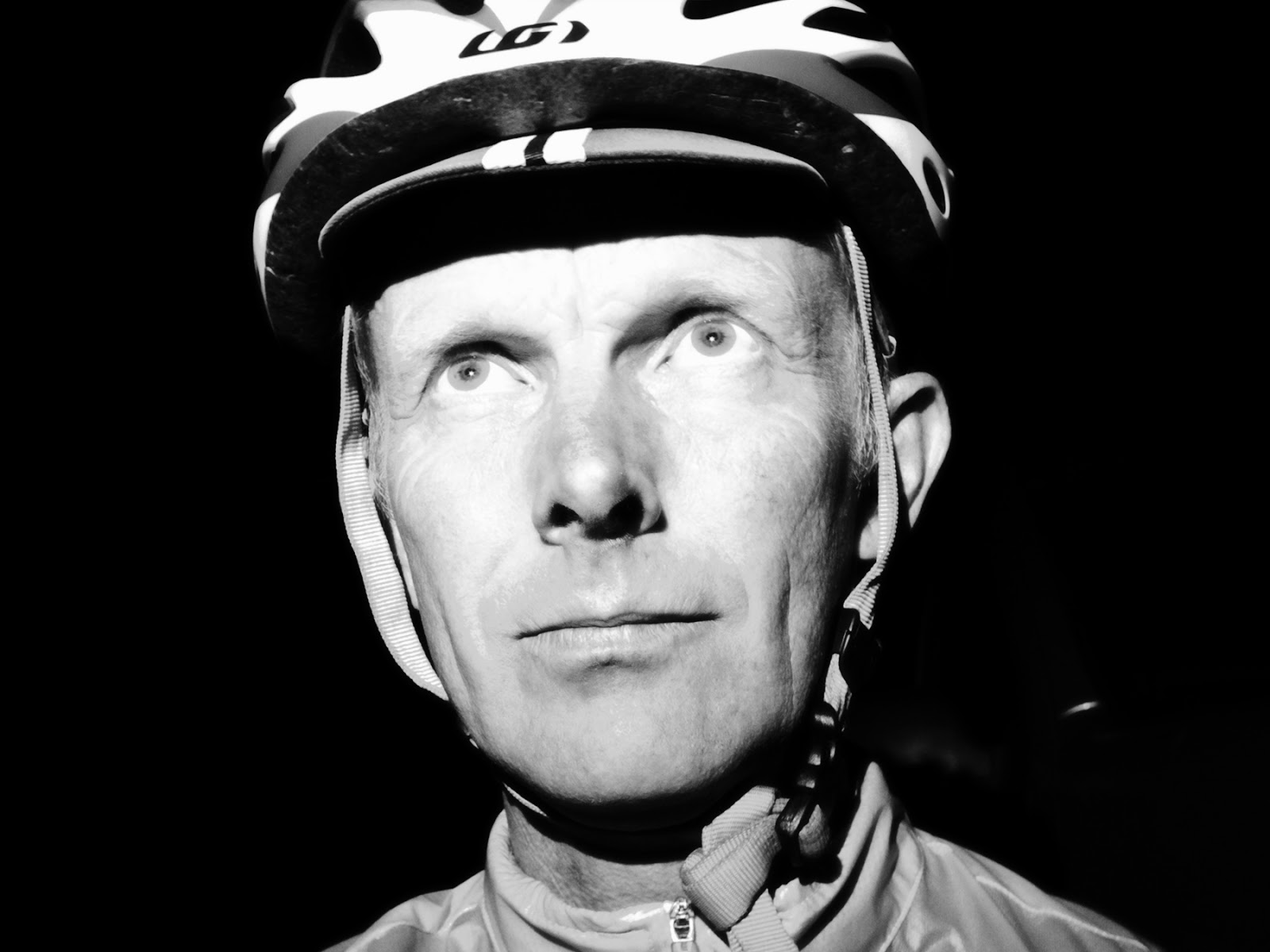 It felt warm outside at the car, but the descent quickly chilled me. By the time I got to Barber Booth, I was relishing the idea of riding up the hill to get warm.

The first part of the climb as far as the Chapel Gate turn off is steep, I was huffing and puffing within minutes. The next section allowed me to gain my breath back, before the climb steepened again.

I get to the car and grab a drink of water that I've left on the bonnet.

The most important job though is to mark the first lap tally on the paper that I've fastened to the passenger window. I knew that I'd need an accurate way of telling me how many laps I'd done, as Garmins are notorious for over estimating both distance and altitude. I checked the Garmin at the summit, I'd already gained 0.1 of a K and 8 metres of ascent.

I descended cautiously. The road was still wet, and even though I know this road reasonably well in daylight, in darkness it seemed I didn't know it at all.

I was full of negativity for the first 6 ascents. Bits of me hurt that shouldn't have and it all seemed much harder than it should have been. Preconceived expectations, tension and nerves I have learned are what causes such feelings, so I rode on. These feelings would pass.

After the 6th ascent there were the real feelings of tiredness, muscle soreness etc. so I just relax, ride and take in the surroundings.

At first I thought this was some sort of monster. Turns out it was once a badger. 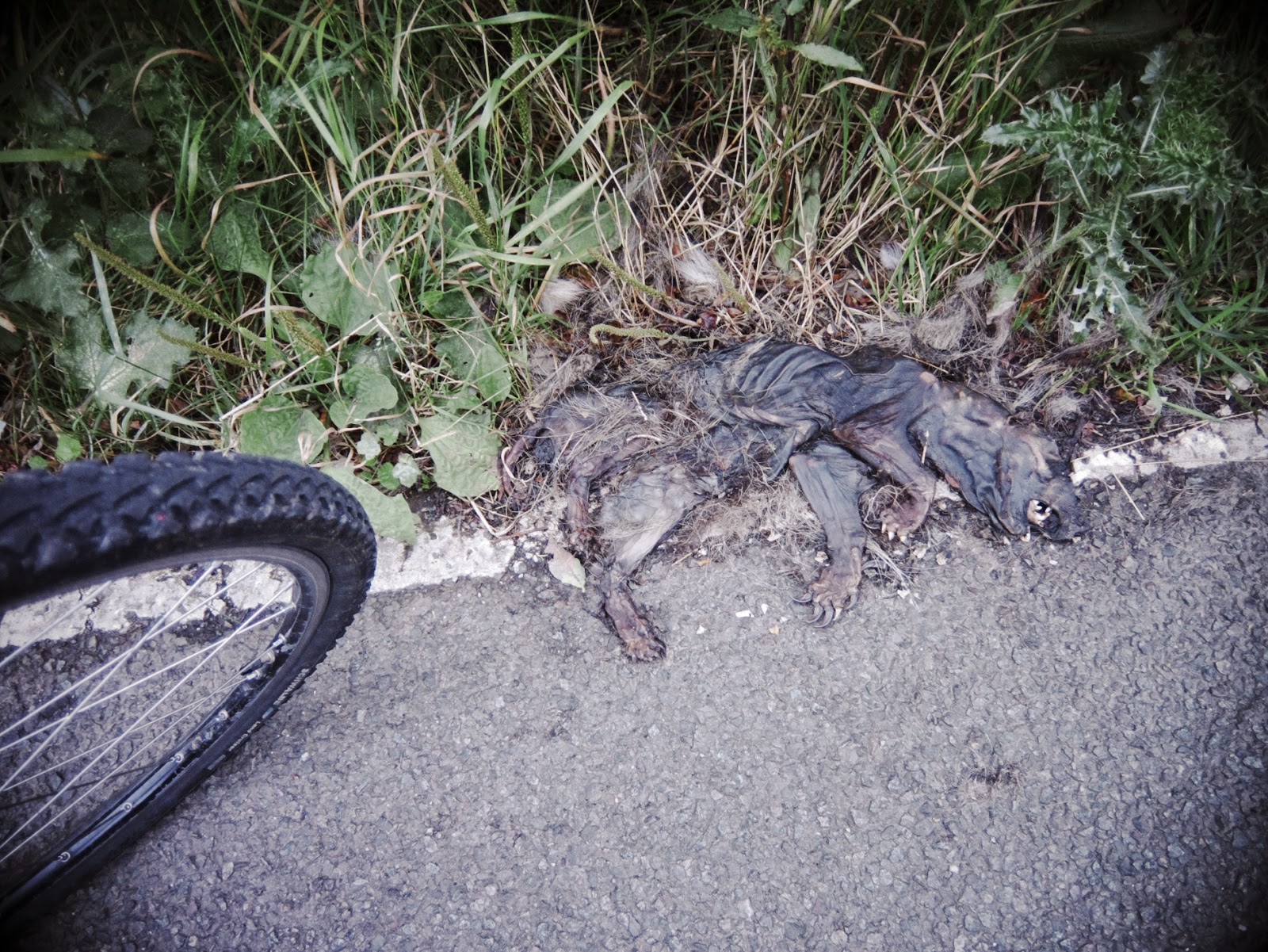 I didn't run over this unfortunate, and yes these aren't the hill climbers tyre of choice. 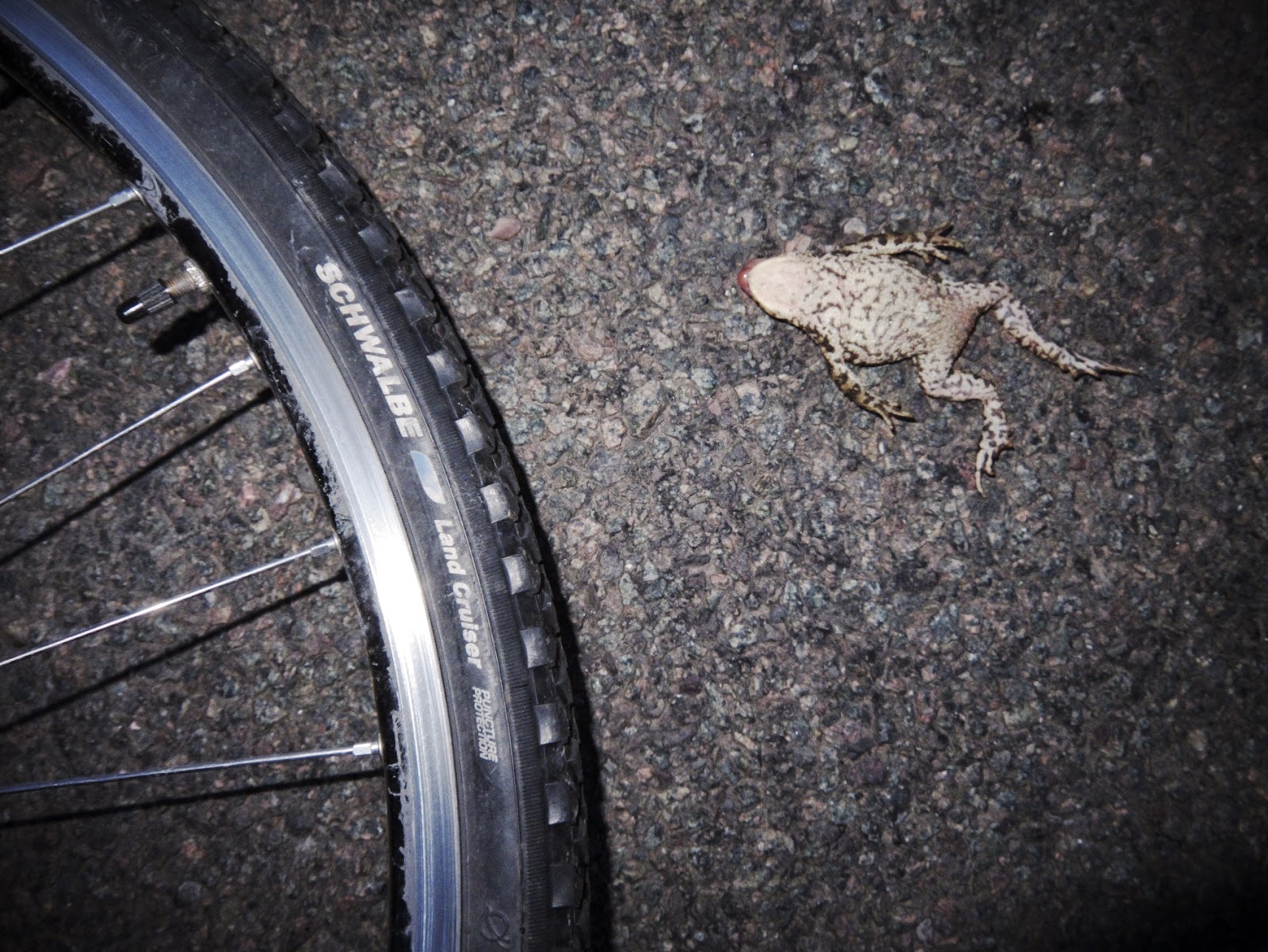 Sometime in the dark hours of Saturday morning I managed to average 29.8 mph from top to bottom with a max speed of 36.5 mph.

On a subsequent attempt I nearly hit a rabbit at near max speed, so shelved any further aspirations on that front.

There was no stunning sunrise, but I was ready for it when it came. 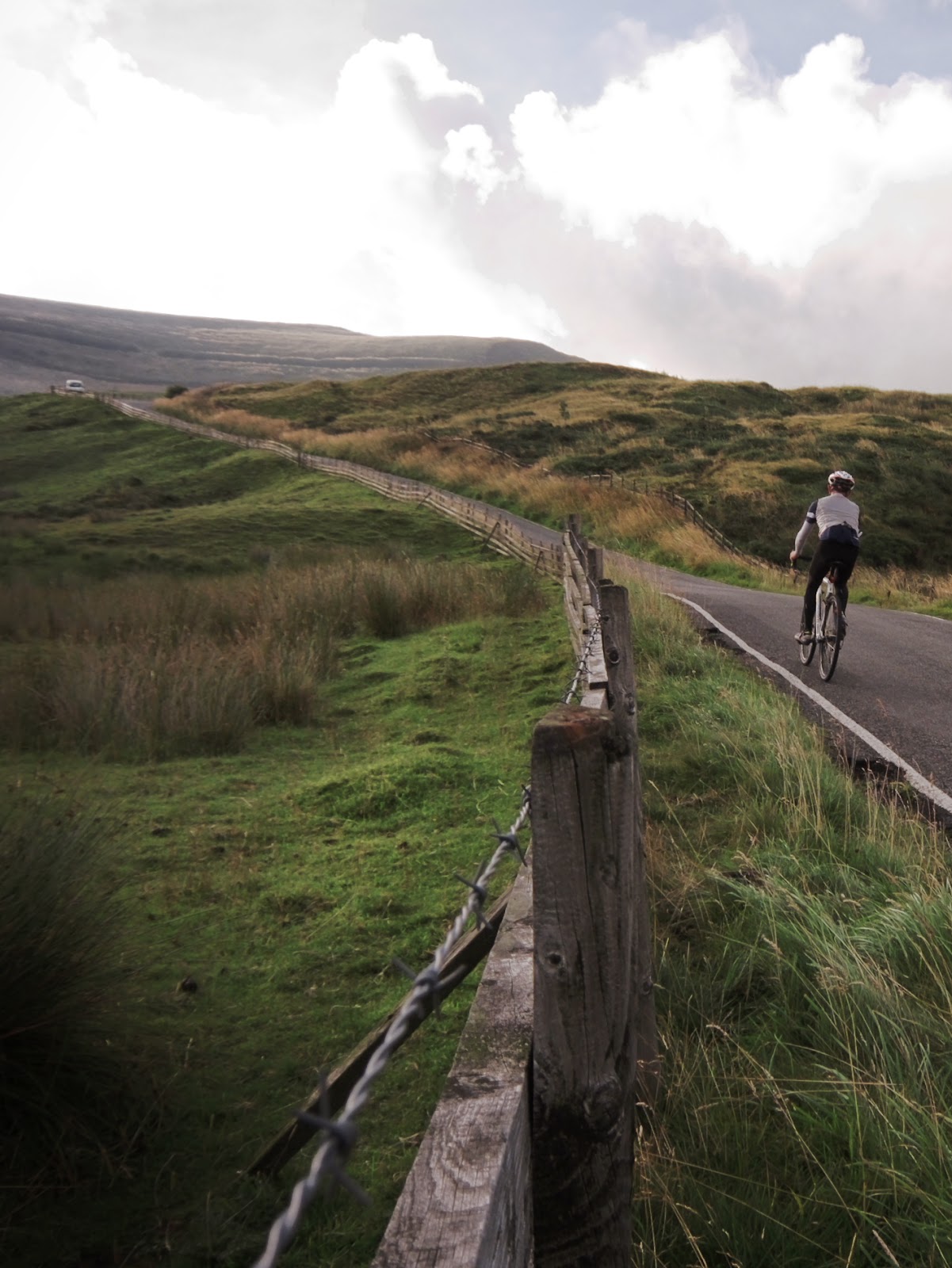 Cool and a bit misty at first, soon it turned into a stunner, with great views towards the Kinder plateau. 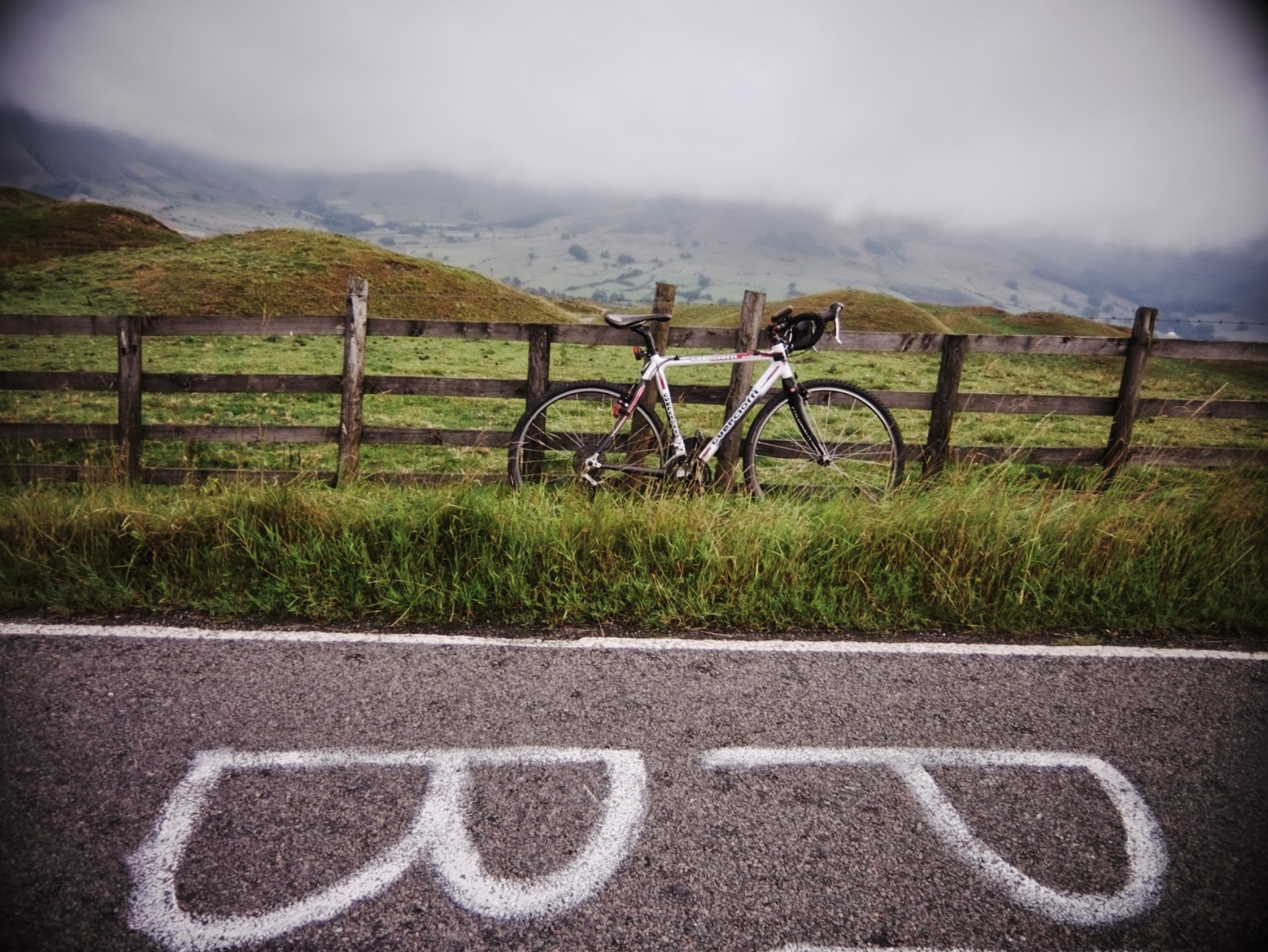 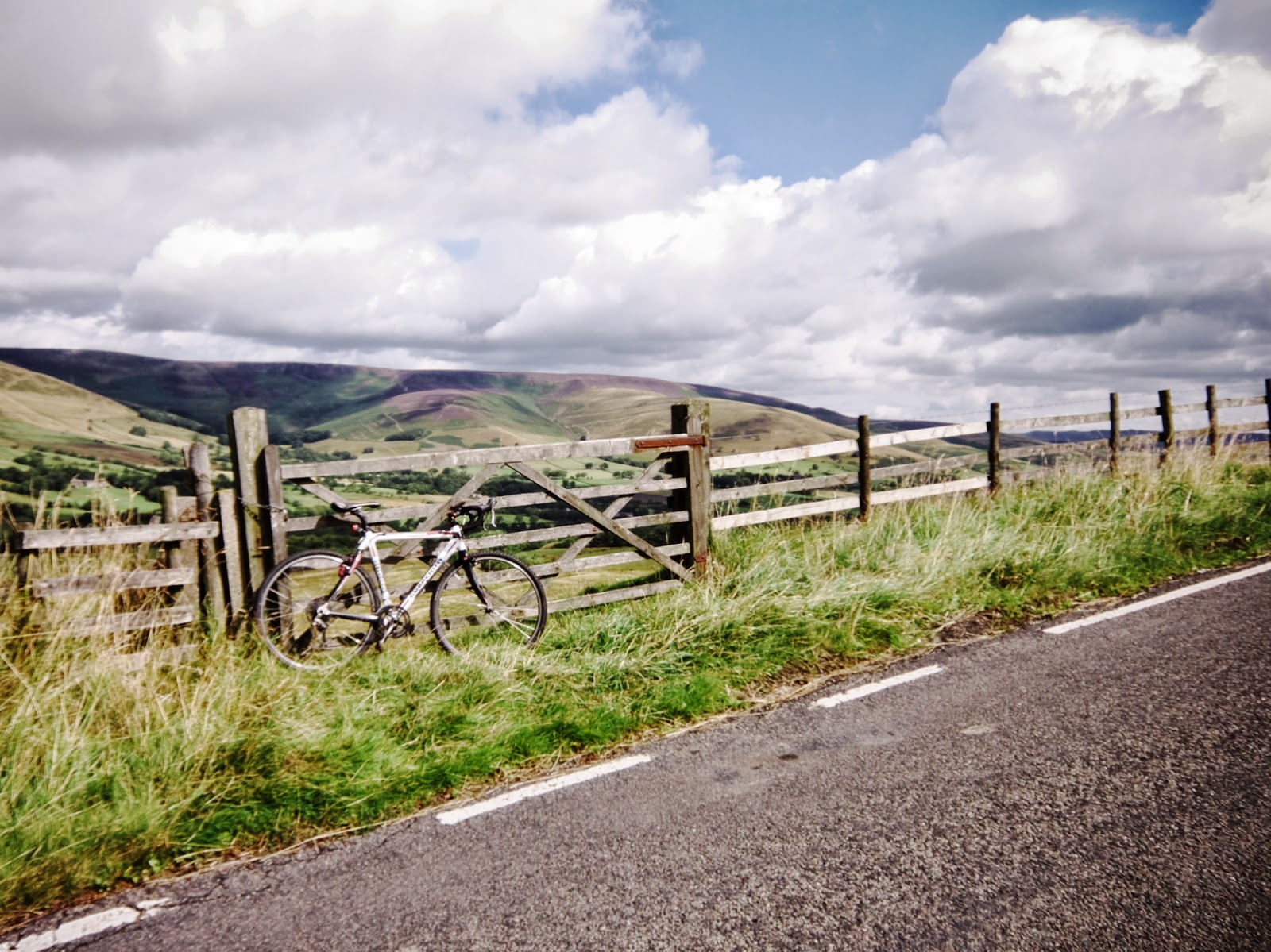 The only problem with daylight though is that you can see where the top of the hill is, when you are near the bottom. :) 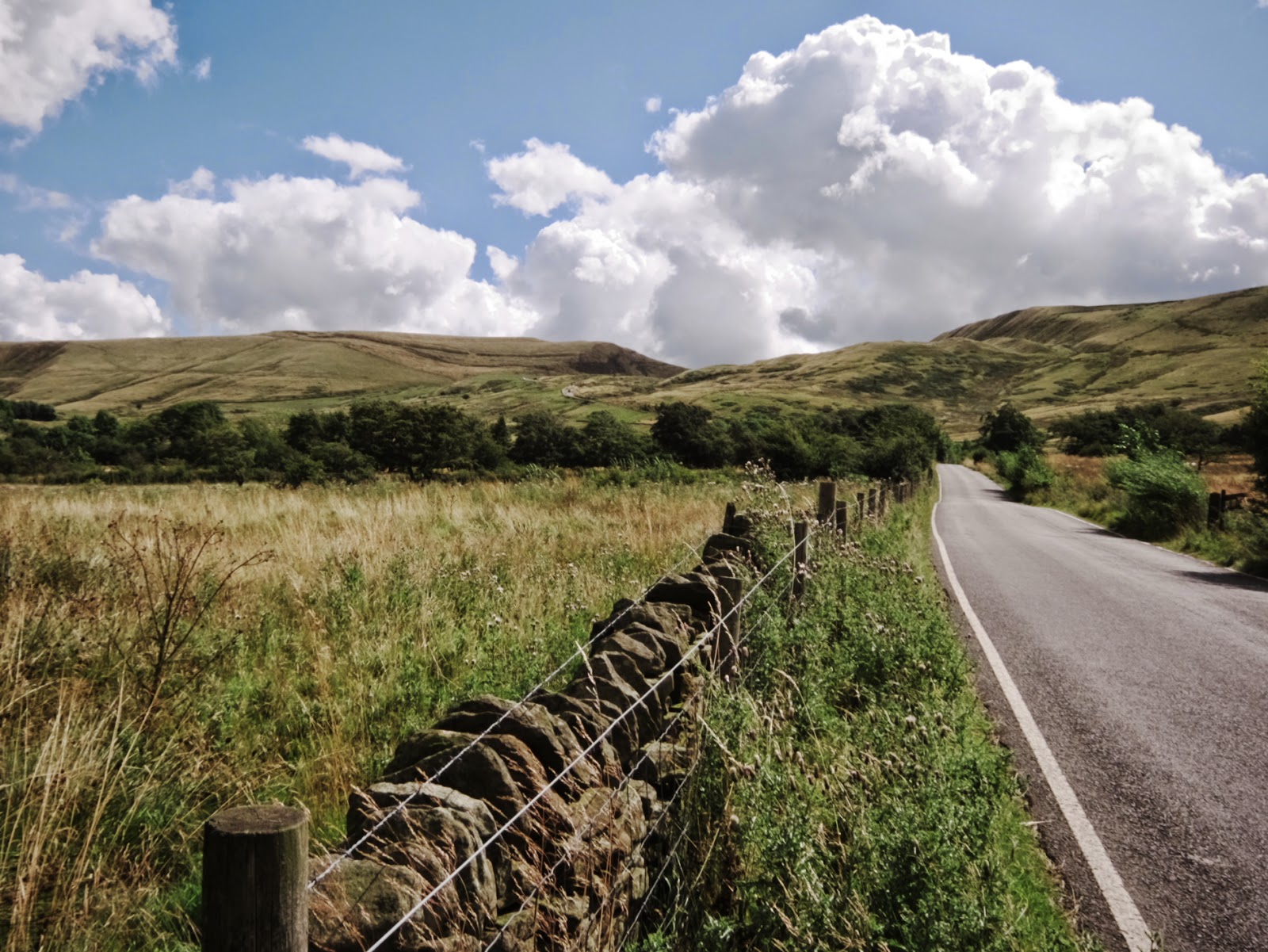 There comes a time in these rides, when barring a mechanical or a crash that you know that you'll finish. 3/4 done, I ticked that box.

On the real Mount Everest near the top there is an area called the Death Zone.

With 5 laps to go, I entered this zone. 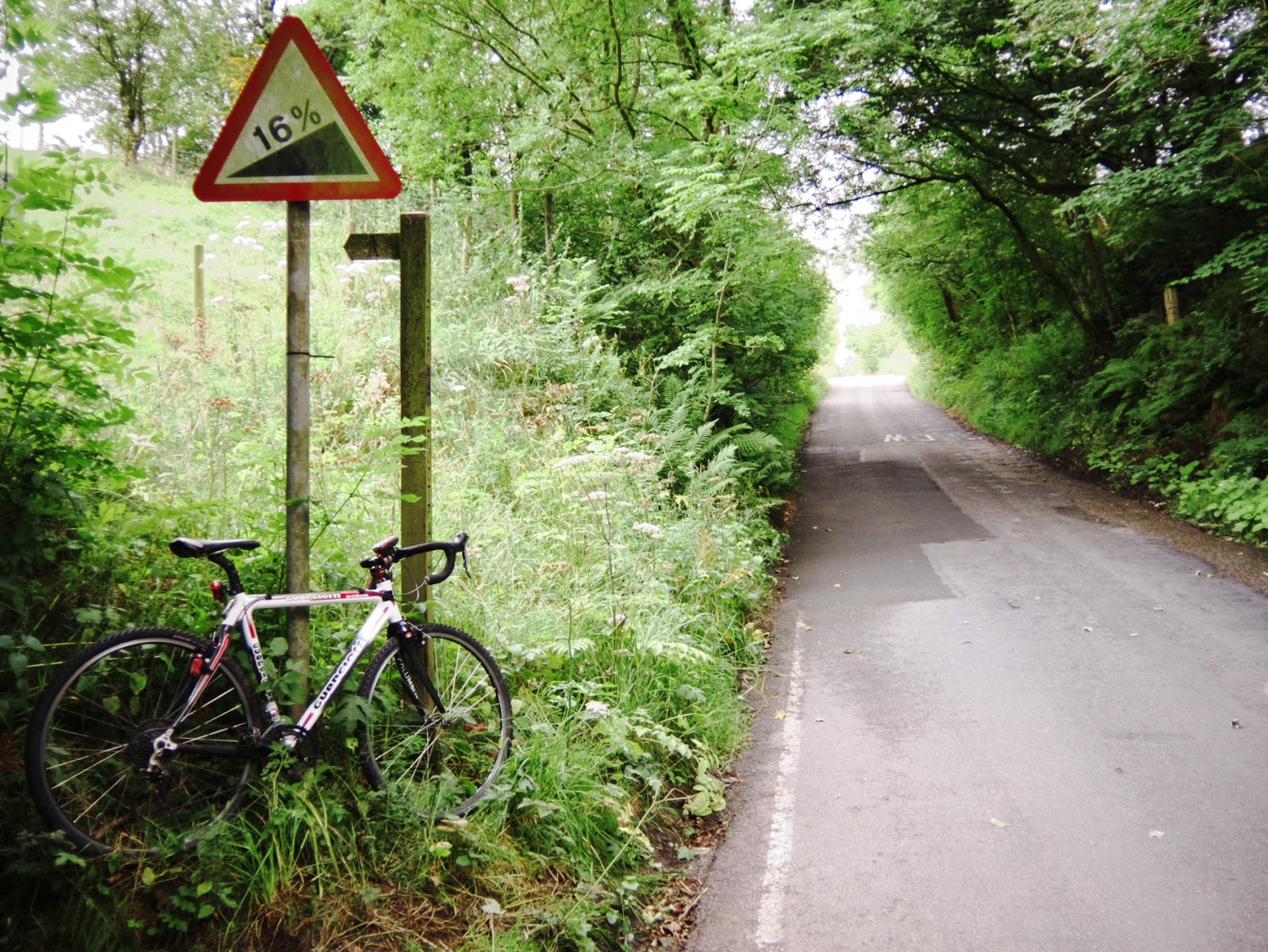 I had to stop just past this sign, and a couple of other times before I'd even made the halfway mark. I was spent.

Wasted I lent my bike against a gate, and lay down in the verge. Ignoring the pump tools, camera etc sticking in my back. I wasn't comfortable but didn't care, it was good to not be on the bike. I closed my eyes relishing the warm sun on my face, but seconds later was roused by a passing cyclist concerned for my welfare. Apparently lying by the roadside isn't a normal thing.

Painfully, I stood up, got back on the bike, and wobbled up the road back to the car.

I regained some composure on the bike. It was now all about conserving energy and getting to the end no matter how slowly. 44 ascents of Mam Tor, and it was done. The height of Everest from sea level ridden in one ride. 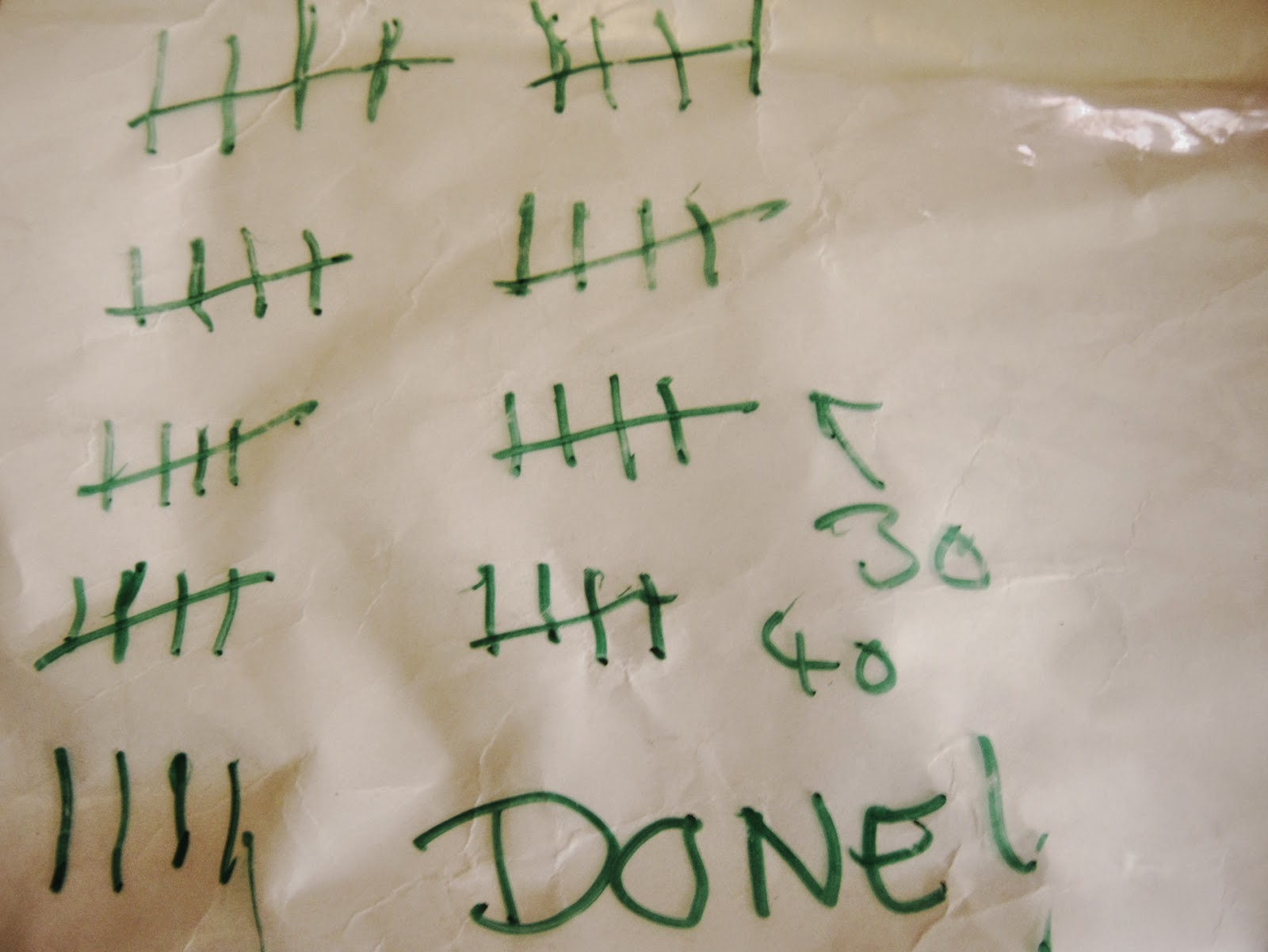 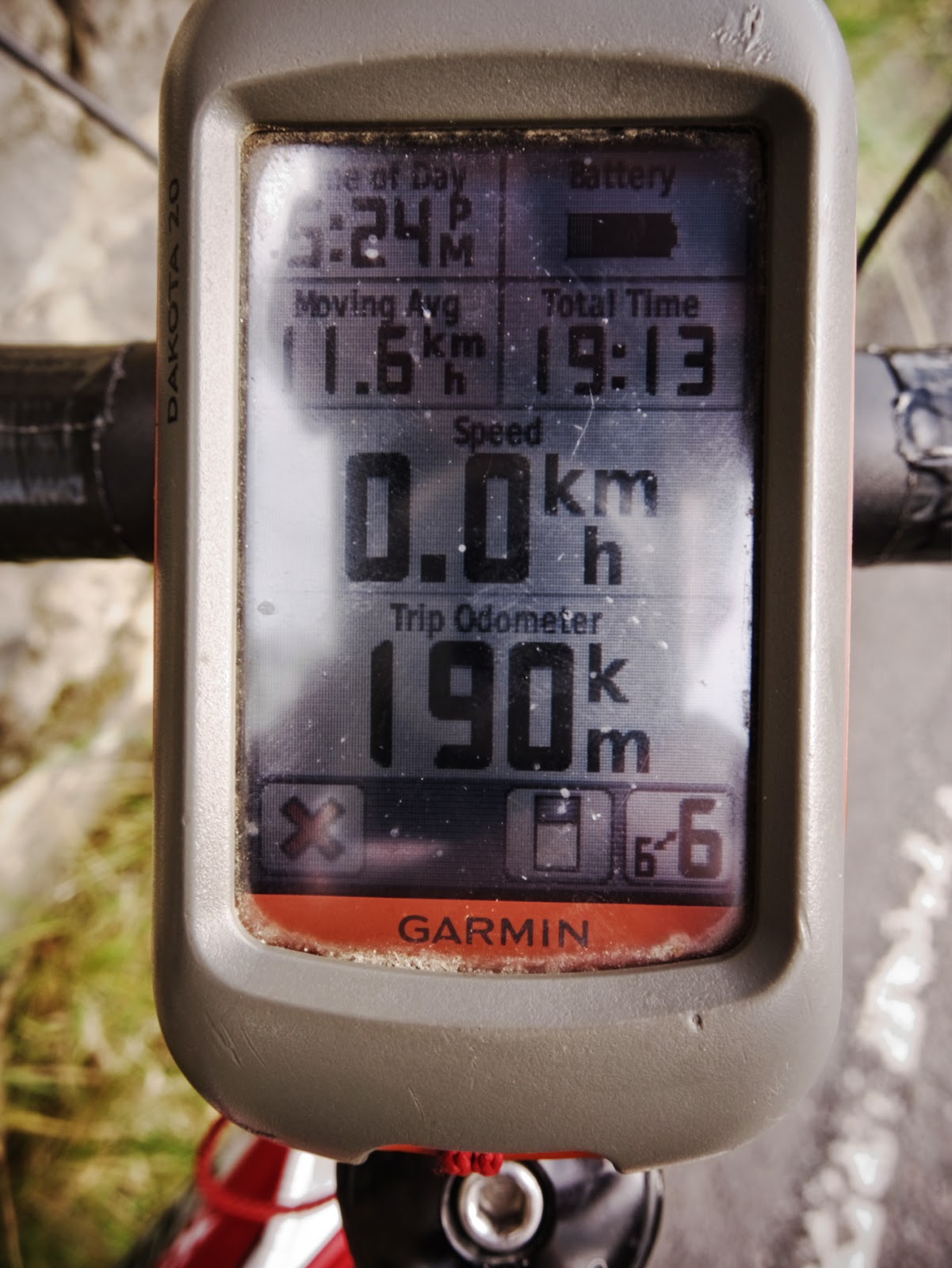 My ride info on Strava. 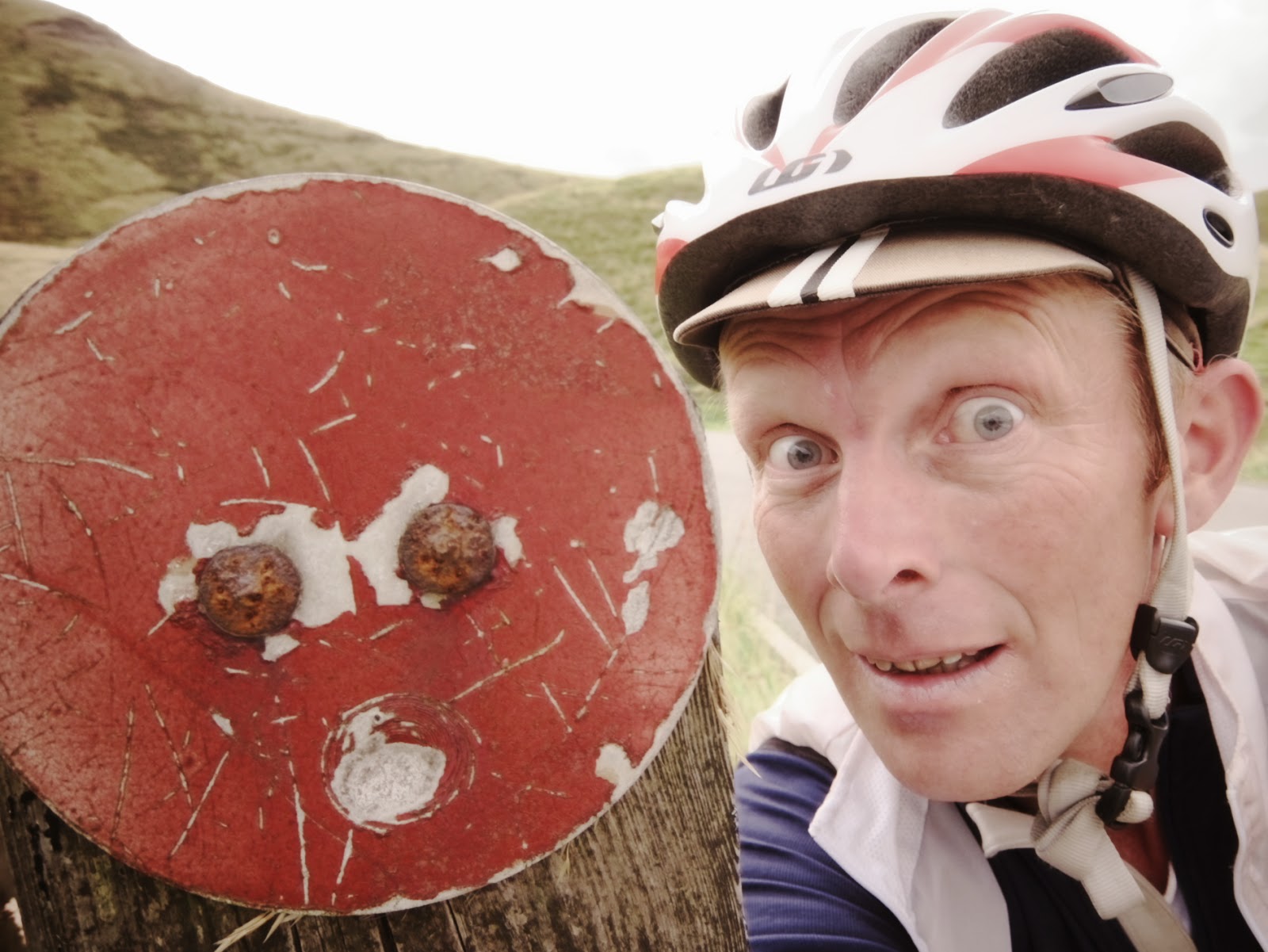 Some thoughts on Everesting.

Hills tend to be windy places, pick a route, and a weather forecast that has a wind with you going up the hill.

Make sure you have enough gears on your bike, you may need them towards the end.

For a no helper ride, stash your food at the bottom, or halfway up the hill, not at the top. I cooled off a lot when I stopped, and wouldn't have wanted to descend cold from the top.

Do your math from Strava and or maps before you leave home, don't believe your Garmin.

The steeper the hill you find the shorter your ride. Though under 4% and you may find yourself pedalling up, as well as down the hill, and riding ~300 miles.

The current steepest hill everested is 18.6% in under 60 miles.

I rode as much in the dark as I could thereby avoiding traffic. Watch out for the wildlife though.